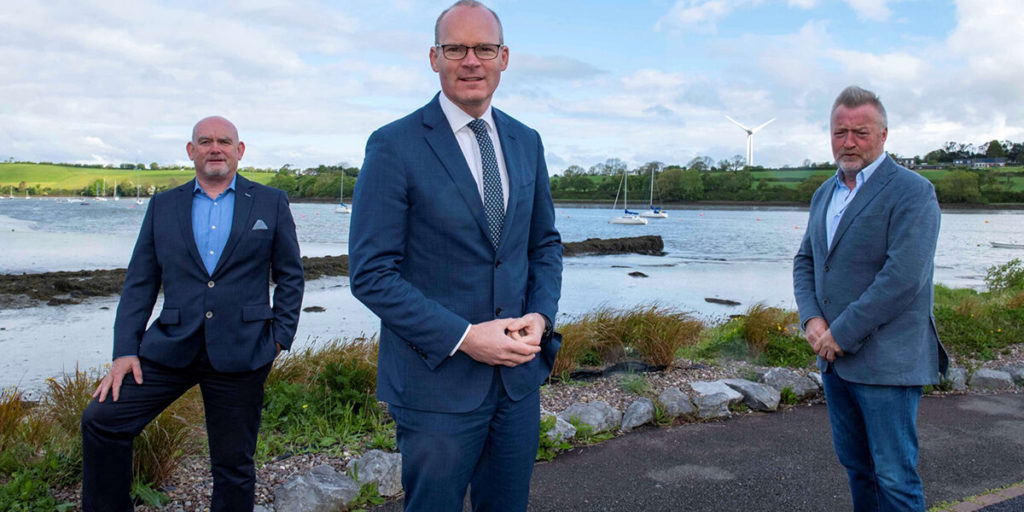 Upon completion, the site will be one of the biggest green energy facilities of its kind in the world. Over 85 full-time direct and indirect jobs will be created and EI-H2 Aghada hopes to be operational before the end of 2023. The cost of construction and connection to the electricity grid is expected to be in the region of €120m.

EI-H2 chose Cork’s Lower Harbour for its first site given its strategic location. The facility is designed to assist commercial customers struggling to reduce their carbon output, who will increasingly need environmentally-sound and sustainable energy alternatives.

The technology being planned for the Aghada site allows for surplus electricity from renewable generation, particularly offshore wind, to be utilised in a process of electrolysis to break down water into its component elements of hydrogen and oxygen.

The Aghada site will aim to provide over 20 tonnes of green, safe hydrogen per day to the commercial market. The green hydrogen produced at the plant can be safely added to existing natural gas supplies, helping high volume energy producers to reduce their carbon emissions.

EI-H2 is owned by Cork businessman, Pearse Flynn, who says, “Ireland is starting to take leadership in tackling climate change. The production of hydrogen from excess wind capacity will play a significant role in Ireland’s decarbonisation, given that Ireland could be generating 8 GW of offshore wind by 2030. There inevitably will be ‘curtailed’ energy that will go to waste unless we find ways of using it. Ei-H2 is planning the production of safe and environmentally-sound green hydrogen that will allow industry to decarbonise. This initiative will create and sustain local jobs, and go a long way towards helping Ireland meet its international obligations on climate change.”

Welcoming the announcement, the Minister for Foreign Affairs, Simon Coveney TD, says; “Ireland faces a challenge to decarbonise over the next decade, and a plan like that being put forward by EI-H2 would go some way towards helping us achieve what might now seem like impossible targets. Every business in Ireland should be looking at ways to decarbonise, starting with the largest, and working our way through our entire economy. The production of green hydrogen using surplus wind energy is just one way that we can help put Ireland on a solid environmental footing, and show global leadership in energy projects. I would like to wish Pearse Flynn and the team at EI-H2 every success as they develop this, and other projects, in this space in the years to come.

To help with the project, Pearse Flynn has acquired Energy Services, a strategic acquisition of an energy consultancy which has a long experience in grid connections and energy markets operation. These are seen as essential for the integration of renewable energy from offshore wind and other sources, into green hydrogen and ammonia production facilities.

The proposed site has been selected because of its proximity to an existing triangle of energy generation, including power generating stations, heavy industry and an oil refinery. There is also potential to export green hydrogen in the future using a fleet of environmentally friendly ships. By 2050, green hydrogen will account for 80% of the shipping industry’s energy demand, the vast majority of which will be in the form of green ammonia. The same product will meet an estimated 60% of the aviation sector’s energy demand.

The newly appointed CEO of EI-H2 is Tom Lynch, who has an extensive track record in the energy sector both in Ireland and overseas.

Mr. Lynch said: “Ireland has incredible potential as an emerging leader in green hydrogen. We have identified East Cork as the first site to develop this safe form of new energy, and will be looking at other strategic locations around the country where the power of excess energy can be harnessed. As we approach the COP26 conference in Glasgow this year, we believe that the use of green hydrogen can present Ireland with a realistic and simple way of decarbonising and meeting our Net Zero targets in a meaningful way, and will form a key part of the energy transition, enabling high penetrations of renewable energy onto the system in order to meet Ireland’s climate change commitments. We look forward to engaging with all relevant authorities and individuals as we plan a greener future for this strategically important site in Cork Harbour.”

EI-H2 will shortly begin an intensive round of pre-planning discussions with Cork County Council, the Department of the Environment, Climate and Communications and other interested parties ahead of the formal lodging of planning permission later this year.